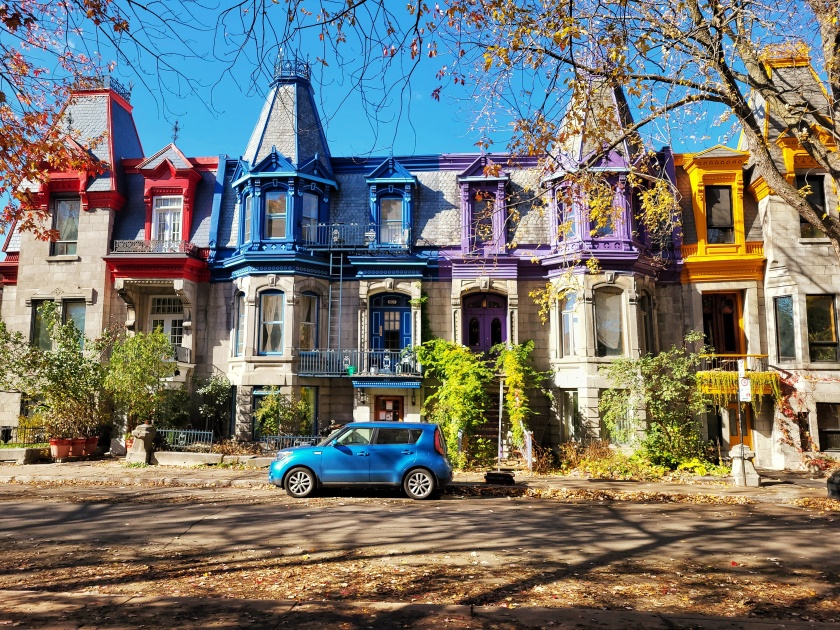 Montreal is a vibrant and international city, associating perfectly its European heritage and a very modern and outgoing North-American style. There, you’ll find cute little streets with smaller houses as well as big skyscrapers, a rich cultural scene and a plethora of restaurants specialising in all sorts of different cuisines.

As you may know, I have been to Montreal several times already, visiting my sister who lives there, and I truly feel like the more I go there, the more I enjoy this city. So, to complement my previous post about my favourite things about Montreal, here’s a little guide to the city, focusing on some of Montreal’s districts that I really love and always want to go back to when I am there!

A few words about Montreal:

Located in an island on the Saint Lawrence river, Montreal was first a trading area for the First Nations (Indigenous Canadian people), thanks to its fertile soil and strategic location. This is until the French colons arrived and built a fortress there in the 17th century, which then expanded through the influence of trade and immigration from the British, followed by many other people from all around the world. As a result, we now have a multi-ethnic and multicultural city, which is the second largest French-speaking city in the world!

When should you go?

The fact that Canada’s winters are harsh and freezing cold is no secret to anyone, so I’d say it’s best to visit in the spring, summer or autumn, especially since it will be easier to go about the city when there are no snow storms. The first time I visited, it was maple syrup season, at the end of winter / beginning of spring, but it was amazing despite the cold. The other times, I went there in autumn, and while there is a higher chance for cloudy and rainy days, the foliage there is absolutely stunning!

My favourite neighbourhoods in Montreal

This part of Montreal seems to be the remnant of the city’s past, with narrower cobblestone streets and cute little shops that almost make you feel like you are back in time. After strolling about the cute Saint-Paul street, a walk along the Old Port by the Saint-Laurent river is definitely a must, followed by a visit to the lively Jacques Cartier square.

In this area, you should also check out the Notre-Dame Basilica, a gothic church with a stunning blue-and-gold interior. If you’re curious about Montreal’s history, the Pointe-à-Callière archaeological museum takes you on a journey through the city’s complex past.

No guide to Montreal would be complete without a mention of the Mount Royal. While making your way to or from the iconic illuminated cross that dominates the hill, you’ll stumble upon lookouts offering stunning views of the city and the Saint Lawrence river, cute alleyways, a peaceful lake and an historical graveyard. It is absolutely a must-do in the city and prefect if you need a quick nature fix!

Going back down, you can stop at the huge Saint Joseph’s Oratory, an enormous sanctuary that is visited by millions each year and overlooks the city,  or wander about Outremont, a beautiful neighbourhood with elegant houses.

The Plateau and Mile End:

This is probably one of my favourite areas of Montreal, thanks to its laid-back, artsy and colourful vibe. These districts basically represent most of the things that I love about Montreal: cute independent shops, lots of small restaurants, cafes and brunch places, vintage stores, multicultural influences, spiral-staircase houses in quiet streets and colourful murals.

When you are there, be sure to try the famous Saint Viateur bagels and the iconic smoked meat sandwiches at Schwartz, then head towards the Saint Louis square to see beautiful and colourful houses, typical of Montreal’s architecture (see the featured image of this post).

This neighbourhood got its name from a great wave of Italian immigration in the 20th century, and if you are looking for a warm and Mediterranean atmosphere, and to try some delicious Italian food, look no further. With its countless restaurants, pastry shops and Italian-style cafes, Little Italy is just a delight to walk around in – and stop by for a bite.

But Italian food is not the only thing you’ll find there: you can buy fresh fruits and vegetables at the Jean Talon market, walk along the Saint Laurent boulevard or stop by some of the many cute little shops!

A few minutes away from Little Italy, and with a similar vibe, you’ll find in Villeray many restaurants offering a variety of different food options, nice coffee places and small independent shops, especially if you walk along De Castelneau street. My favourite things about Villeray are all the cute Montreal-style houses with painted spiral staircases on the front and peaceful tree-lined streets – especially in autumn, when all the leaves turn gold!

The city centre of Montreal is a lively and busy district made of tall skyscrapers, cars rushing about and fashion stores. That’s where you get the North-American vibe of the city! It is the business and commercial centre of the city, but also home to the entertainment district and many of the city’s most popular art museums.

There are plenty of things to do there, from strolling about Sainte Catherine street, Canada’s longest commercial street and checking out the high-end and more affordable shops, to visiting one of the numerous museums, hopping to the Barbie exhibit or just grabbing a drink in a nice bar!

Westmount is one of the most prestigious neighbourhoods of the island of Montreal, and if you have a thing for beautiful and impressive villas and mansions, and if you don’t mind walking up quite steep hills, this is an area to check out! It is mostly residential and its residents are quite rich, so a nice stroll about the streets will certainly have you giving in to your wildest fantasies of three-stories villas overlooking the city from floor-to-ceiling windows, knowing too well that you can’t afford it – and yes, that’s what happened to me! The more you go up, the more impressive the houses become!

In the middle of the Saint Lawrence river, the park Jean Drapeau is a nice area that you can go to if you want to escape the buzzing city centre for a bit, stroll along the river or have a cute picnic. A lot of events are also organised there all year round, there are lots of greener parts, some museums and lots of activities to do, so there’s a bit of something for everyone! When I went there, we just had a nice walk around, enjoying the peaceful atmosphere and taking in the beautiful view of Montreal’s city centre from another perspective!

As you have seen, Montreal’s complex heritage accounts for its multicultural and vibrant atmosphere that will definitely please everyone. You’ll always have something to do, somewhere to go to or some food to try in Montreal, and that is one of the things that I love about this city!

There are also a ton of things to do nearby: trying Canadian food at a “sugar shack” (spoiler: it’s greasy and it’s sweet and it’s delicious), exploring the nearby national parks like the Mont-Tremblant or La Mauricie, visiting the city of Québec or discovering other beautiful areas of the region, like the Gaspésie or the Eastern Townships.