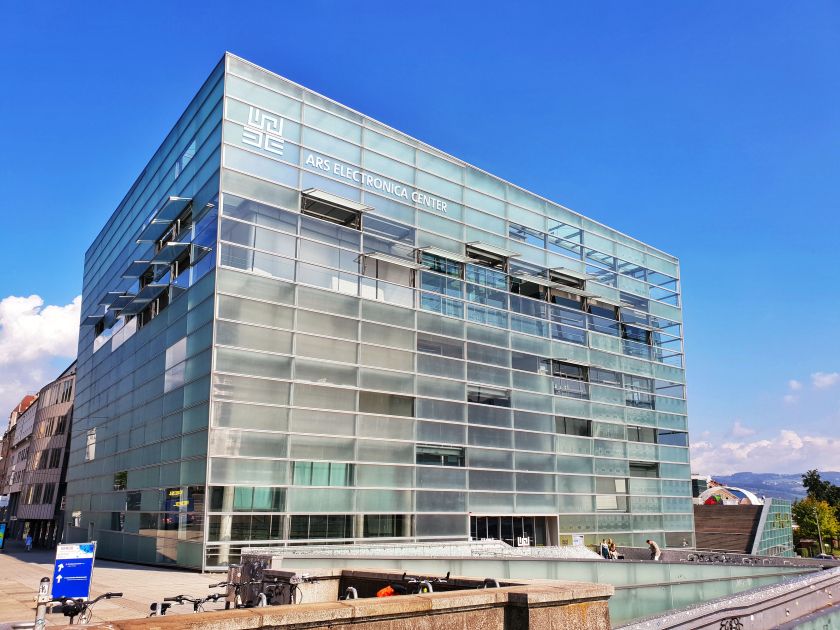 Last September I moved to Vienna for a few months, and during this time I tried to travel as much as possible in and around Austria. My very first weekend there was thus dedicated to Austria’s third-largest city, Linz.

Located in the northern part of Austria, this city is well known for different reasons: the Linzer Torte and the city’s vibrant and modern art scene. As I had never heard of the Linzer Torte before going there, the main reason for my visit was the Ars Electronica Festival that takes place each year in Linz.

The artistic and cultural life in Linz is dominated by electronic and media arts, embodied by the incredible Ars Electronica Center, located near the centre of town on the bank of the Danube. This museum and research facility hosts a huge variety of interesting exhibits that feature technologically-oriented artists. They also have a so-called “Deep Space” room where they show animations on the floor and walls.

Linz is part of the Creative Cities Network of the UNESCO in the “Media Arts” category. This network was created to promote cooperation between cities that, like Linz, place creativity and cultural industries at the heart of their development plans.

The Ars Electronica Festival during the day

It takes place in early September for a few days, and attracts a massive number of visitors. In fact, every hotel and Airbnb were completely packed when I started looking for accommodation.

Each year, a theme is selected, and the whole city becomes a gigantic exhibit that gathers works from artists, scientists and technologists. Last year, the theme was “Error: the art of imperfection” which in itself gives you a lot to think about.

Once you have your tickets, you can walk freely around town and go inside the different monuments and museums that showcase a lot of artwork, from incredible ecological projects, to breathtaking light and music shows.

Inside the Ars Electronica Center you can also experiment with many technologies for free like laser printing and cutting!

It is incredibly hard to describe what kind of things you can found there, as the diversity is huge and I guess it varies a lot each year. Here are some works of art that stuck with me (that doesn’t mean I understood all of them though, so if you have an idea of their meaning, feel free to comment!):

There were so many things to see that it is impossible to list everything here, but a lot of the works revolved around the evolution of technology and its consequences, new ways of communication, and used light and neon signs, and some mysterious subjects that were quite hard to identify.

The Ars Electronica Festival at night

When I went to the Festival, I really didn’t know what to expect, and after the first few hours I was amazed by every single artwork. This first impression stuck with me through the entire day, and became even more intense on Saturday night.

That evening, as the day grew darker, a huge number of people started to gather around the Danube, on the bridge in front of the Ars Electronica Center and the Lentos Kunstmuseum.

Then, one of the most incredible show I have ever seen started. There was music, a big screen with a video, then a gigantic wheel with acrobats inside of it started to roll down the bank of the Danube, a huge metallic horse was set on fire, a boat came down a building, another one that looked like a tank arrived on the river with a robot on top of it…

It ended with an incredible firework and a human “curtain” of acrobats that moved in rhythm with the music.

Everything was happening everywhere at the same time, there was fire, smoke, music, acrobats, enormous sculptures, boats, robots, fireworks, you name it!

…And behind this open-air show, the lights of the Ars Electronica Center changed regularly, as they usually do.

It was cold and quite hard to see as the crowd was massive, but absolutely worth it! Through the entire show I kept thinking “what next now?” and everything was absolutely unpredictable.

The Ars Electronica Festival is definitely something I would recommend to anyone who wants to see extraordinary things. It is interactive and beautiful, it makes you think and blows your mind, amazes and surprises you. Even if you’re not really interested in electronic arts or technology, I’m sure you will absolutely love it!

I talked a bit more about Linz in this post, but wanted to have one specifically for this Festival, which was really one of the greatest experiences I’ve ever had. It takes place in September each year, and lasts 4 to 5 days, though I only went there for the weekend and there was already so much to see!

Other posts about Austria:

8 Things to do in Linz, Austria
– Going to a ball in Vienna